Efficient electrification extends to a wide range of industrial and manufacturing processes–even producing beer cans. When a well-known beer company enlarged its sales territory, its beer can production facility sought to increase its production rates, as well as improve the cans’ finish. Shipping cold beer over long distances requires an abrasion resistant coating on the cans to maintain a high-quality appearance. The beer manufacturer investigated several can coating curing methods before deciding on an electrified process as an alternative to conventional curing in a natural gas convection oven. The conversion eliminated emissions and significantly reduced energy consumption associated with can manufacturing at the facility.

Before: The Conventional Coating Method

Previously, the beer manufacturer printed the label images and then cured the decorative inks and varnishes in a natural gas-fired convection oven. First, an inked printing blanket laid the image on the exterior of the can as it spun on a mandrel. Then pin chains conveyed the can through the oven, which cured the coatings in 12 seconds at 400°F (204°C). This thermal coating and curing had several disadvantages:

To address these disadvantages, the beer manufacturer selected an ultraviolet (UV) curing and coating system for its high quality, high-quantity beer can line. The cans now undergo a similar printing operation as in the conventional line but use inks designed for UV curing. UV inks and varnish contain a photo-initiator that allows them to cure in about 0.5 seconds upon exposure to UV radiation from special lamps. Because the cure is so quick, the coating system no longer restricts line speeds. Use of UV rather than high temperature curing eliminates the possibility of can damage due to overheating.

Benefits of the New Process 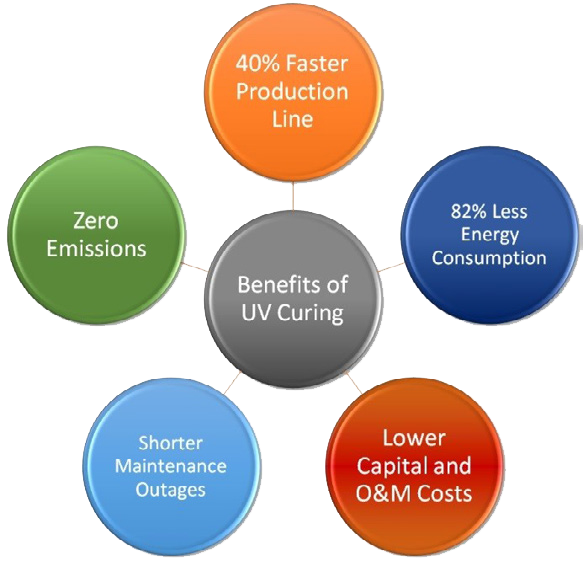 Due to reduced maintenance costs and significant energy savings, the simple payback for the plant’s investment in UV curing is approximately four years. See the figure summarizing the primary benefits that the beer manufacturer realized with this electrified approach. Although the UV curing process can currently achieve the same processing speed as the conventional system–1400 cans per-minute–the plant expects the line to reach 2000 cans per-minute. The manufacturer also anticipates less line downtime. The annual energy consumption of the UV system is approximately 105,000 kWh, compared to approximately 675,000 kWh with the convection oven system (which includes 1950 MMBtu in fuel consumption and 100,000 kWh for auxiliary power). The UV oven itself requires 90% less floor space than the conventional oven. With no local fuel combustion, emissions for the new system are zero. Importantly for the manufacturer, all these benefits are achieved while applying high-quality coatings to the cans.