Chevy Chase, MD—(September 9, 2005) When first evaluating environmentally friendly–low volatile organic compound (VOC)—coatings to refinish their outdoor patio benches, the South Coast Air Quality Management District (SCAQMD) of Southern California considered solely water based coatings. The California sun and harsh environment posed a challenge for the waterborne technology, however, causing the coatings to fail after only a few months. At that point, SCAQMD staff sought alternatives which could endure the outdoor exposure, and help the agency assess the feasibility of environmentally friendly architectural coatings. Ultraviolet coatings turned out to be such an alternative, offering not only a clean process, but a superior protective finish at reasonable cost.

“Architectural coatings represent one of our largest emission source categories here in the SCAQMD,” says Laki Tisopulos, SCAQMD’s Assistant Deputy Executive Officer. “Over the years, through successive amendments to our architectural coatings regulation, we have managed to significantly reduce emissions from this source. However, there is still room for further emission reductions. We are searching for the ultra low and zero VOC technology that will get us to the next step.” To help address this challenge—and provide the SCAQMD with a potentially superior patio bench finish–UV technology was chosen as the means to tackle the job.

“Our first challenge was to take the benches in the poor weather-beaten condition they were in and seal and refinish them back to their original condition,” says Bob Coleman of Merecole, a UV supplier that helped develop the project for the SCAQMD. “Our goal was to show the superiority of a 100% solid UV chemistry compared with solvent or water based systems in regard to weatherability, durability and chemical resistance. The project revealed the superiority in quality of the UV finish. After over one year of exposure to the outside elements, the UV coating has held up and not shown any signs of breakdown or weathering.” Mr. Coleman reports that the SCAQMD was very pleased with the results they obtained with UV technology. Negligible VOC emissions from the process were an added benefit, of special importance to the agency.

“For those considering the use of UV curing, the real importance of this decision in California is that UV curing first had to pass the litmus test that it was the preferred environmental solution and then, that it offered sufficient commercial value added to make it economically viable. When UV curing passes both imperatives, the importance of UV becomes unquestionable,” says David Harbourne, RadTech President and President of Fusion UV. “The successful completion of the patio bench project has sparked further interest in UV technology by SCAQMD,” says Rita Loof , RadTech Director of Regulatory Affairs. “They are looking into other architectural applications to showcase at their Diamond Bar, CA headquarters. Portable curing equipment, which would allow the UV curing process to be performed in an uncontrolled environment, is one of the areas currently being looked at.”

“Ultraviolet and Electron Beam technology can certainly play a significant role in helping us reach our clean air goals,” says Mr. Tisopulous of SCAQMD. “While UV/EB technology has been quite successful in the manufacturing environment, we had not seen the same level of applicability in the architectural coatings area. Now we are looking quite favorably to the prospect of using UV/EB architectural coatings, which can result in significant emission reductions and benefit the environment. We are extremely interested because UV/EB resins will offer an additional compliance tool to manufacturers and end users of architectural coatings, enabling them to strike a balance between economic and environmental concerns. The fast curing capabilities of UV/EB can be an added bonus to both contractors and users.”

“In the past, architectural applications were considered the next frontier for UV/EB technology. The success of UV materials in the SCAQMD patio bench project may very well prove that, for UV/EB architectural coatings, the future is here now,” says Ms. Loof. 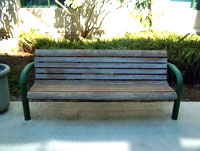 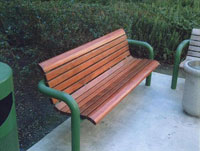